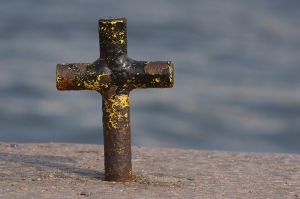 James Cameron, the Hollywood director, is about to hold a press conference announcing that he found the tomb of Christ and that his body was still there.

His evidence you ask? DNA!

Where, would James Cameron get a sample of Christ’s DNA to test? It’s a fair question, but you just know that some people are going to buy into this myth without asking. You have to hand it to Mr. Cameron. After all, convinced more than a few people to like Titanic, so this should be a cinch for the anti-Christian crowd to ingest.

I’ve linked to the blog at Time magazine above (click on the title of this entry). Check it out for yourself. Apparently, Mr. Cameron also claims that Jesus and Mary Magdalene had a son, Judah. Dan Brown, author of The Da Vinci Code claimed they had a daughter named Sarah. Maybe Cameron and Brown can wrestle on pay per view to see which myth should prevail. It would certainly be more interesting than most of their recent work.