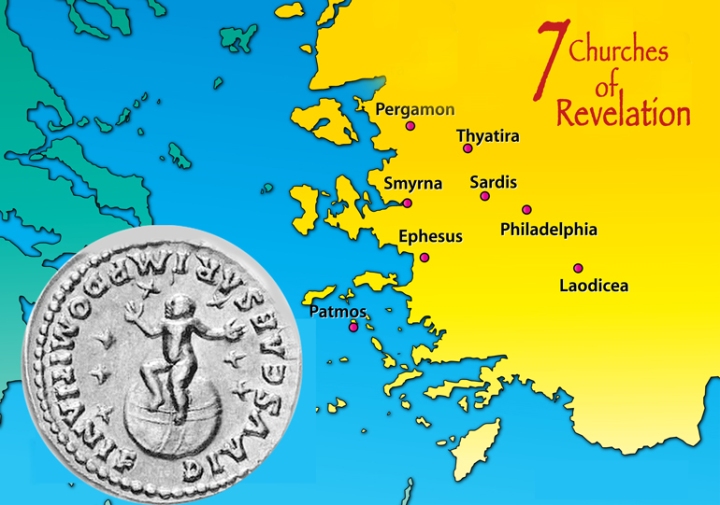 Anyone with ears to hear must listen to the Spirit and understand what he is saying to the churches.

In 2011, we studied the 7 churches of Revelation, if anyone wants a PDF of those studies, You can download them by clicking the links by each church name.  This week, we are continuing our study of Revelation and we will cover some new material and revisit some of that material as well. As always, ideas come from all over but the typos are my own.

An Introduction The seven churches of Revelation were real churches (congregations) in that day, so we have to look at them historically, but we also have to look at them spiritually. The prophecy was given to them and, therefore, it would have been written in terms they could grasp. There were many churches in Asia Minor, but Jesus picked these seven for a reason. They were enduring spiritual warfare. Jesus identifies each church, offers a challenge or commentary, and then makes a promise. Today, we also face spiritual warfare and his promises apply to us as well.

Interpretation There are three ways to read Revelation in the context of the churches.

What are the problems with each of these interpretations? Which do you believe?

Read the description of Jesus in Chapter 1, verses 12-16. Which of those images of Jesus is also used in the message to Ephesus?

The emperor Domitian was the leader of Rome at this time. His infant son died and was depicted on a coin as a god sitting on a globe and surrounded by seven stars. Each day, Christians were faced with pagan idolatry such as this, the temple of Artemis (Diana), and Emperor worship. Do you see any significant symbolism in the stars here? What does it mean to “lose your first love” and what did Jesus say would happen if the church didn’t repent? What promise does Jesus make to the Ephesians if they obey? How does the message to Ephesus apply to us today?

Even though Jesus finds no fault with the church at Smyrna, he offers them a warning. What is the warning and how does his introduction in Rev. 2:8 offer some comfort? Compare to his description in chapter 1. Jesus tells the church at Smyrna that they will be tested for 10 days. Read Daniel 1:12-16 and compare this literal 10 days with the not-literal 10 days of tribulation for Smyrna. What message of hope might Daniel offer them?

Twice in the letters to the churches, Jesus refers to certain Jews as a Synagogue of Satan. This is a reference to people who are outwardly Jewish but are not believers inwardly (Romans 2:29 and Philippians 3:3). In Smyrna, these certain people participated in the persecution of the church for their own gain. Today, Christians bicker and tear each other down rather than work together in unity of faith. What reward is promised to those who persevere? What is the second death?

Even though Jesus understands the problems facing the church in Pergamum—there is a large temple to Zeus there— he still has two complaints against them. What are these complaints and what does Jesus suggest he will do if they do not repent?

Jesus says he will come and wage war with the sword of his mouth. In chapter 1, he is described as having a two-edged sword in his mouth. The sword is truth and the truth cuts deep. Consider the words of Hebrews 4:12

“For the word of God is living and active, sharper than any two-edged sword, piercing to the division of soul and of spirit, of joints and of marrow, and discerning the thoughts and intentions of the heart.”

Jesus ends with a promise to Pergamum—manna and a white stone with a new name. According to tradition, a white stone indicated a not guilty verdict in a court trial. There was also a custom of leaving a stone at the grave of a loved one when you visited. It meant you would not forget that person. What significance does this promise have to us as believers?

Jesus introduces himself as the “son of God” in this letter. Thyatira was, perhaps, the least important of the cities of the seven churches. It was a blue collar town, as we might call it today, but it had some problems. What were the complaints as listed by Jesus?” Workers in Thyatira were required to join guilds (unions) which the Christians were supposed to avoid. People joined them anyway to get work. The town was known for trading in cloth. So, they put money ahead of faith. They ate meat sacrificed to idols and participated in pagan acts. The term Jezebel here refers to sexual sins but if you look at Jeremiah 3:6; Deuteronomy 31:16; and Hosea 9:1 you will see that turning away from your faith is equated with adultery and promiscuity. Note, this is the hometown of Lydia who met Paul in Philippi (Acts 16). It is believed she helped spread the gospel to Thyatira after her entire household was baptized. For those who repent, Jesus promises to make them a ruler over nations and he promises to give them the morning star. What does this mean? (See also Revelation 22:16)

In scripture, falling asleep is equated with death. Sardis would have been a mega-church compared to the others but it was called dead. How can a church that is large and growing be dead? Read Matthew 23:27 and 2 Timothy 3:5. Would it be reasonable to assume Sardis was guilty of playing church? Sardis was a government center. The names of citizens were kept in registers with city officials. Those found guilty of crimes were removed from the register of citizens. How does this compare to the promise Jesus makes to the people of Sardis who obey him?

Jesus found no fault with Philadelphia. Like Smyrna, they were persecuted by a synagogue of satan but they kept the faith. There is a lot of symbolism in this letter. Jesus is described as a door and holding a key to the door. The church is promised three names. “I will write on them the name of my God and the name of the city of my God, the new Jerusalem, which is coming down out of heaven from my God; and I will also write on them my new name.” In the old testament, it says the name of the new city will mean “The Lord is There” (Ezekiel 48). If you read Revelation 14:1, 19:12, 19:16, and 22:4 does it help to understand Christ’s new name and the names written on the people who will be his pillars?

In those days, it was an honor to have your name written on the pillar of a building. When Jesus promised to make the believers of Philadelphia into pillars (not literal pillars) in his new temple and write three names on them, he was telling them that they would have a permanent place with him in his kingdom. Interestingly, Revelation 21:22 says of the new Jerusalem

“I saw no temple in it, for the Lord God the Almighty and the Lamb are its temple.”

In the new Jerusalem, then, we will fellowship directly with God at all times. All will be a temple and God will be in all. The people of Philadelphia are to be rewarded with these three names to show their place. However, Jesus does offer them one warning. What is the warning?

Jesus had nothing good to say about this church, however they were very religious.

“I know your works: you are neither cold nor hot. Would that you were either cold or hot!”

Remember the analogy of the Lukewarm shower? When you get into a really hot shower—my favorite kind—or a really cold shower you know what to expect. When it is only slightly warm, you are uncomfortable and constantly messing with the knobs to get it just right, but it never gets there. Maybe that is like Laodicea. It just doesn’t feel right. In Colossians 4, Paul tells the church to share his letter with Laodicea. Although written before Revelation, consider the warnings to “Devote yourselves to prayer, being watchful and thankful” and “See to it that you complete the ministry you have received in the Lord.” Could these offer a clue as to what is going on in Laodicea?

The people were wealthy and considered themselves blessed and needing nothing from Jesus. Instead, Jesus tells them they need to buy gold refined in fire and white cloth. What did he mean by this?

Those whom I love, I reprove and discipline, so be zealous and repent.

Jesus loves everyone but he wants people to change. The white cloth was righteousness and the gold refined by fire was faith that was actually put to the test and refined by bearing fruit. What was the promise to the church at Laodicea?

These letters were written to seven literal churches while John was on Patmos. However, these letters were each descriptive of a spiritual condition that applies to each of us today. Some believers are complacent, some backslide, some dabble in strange beliefs. Others are busy with the Sunday morning fashion shows and think their faith is just fine. Some are being persecuted and dying for their beliefs right now. Some are living a strong life of faith. The letters of Revelation have a significant message to all of us because every believer on earth falls into one of the categories—and maybe more than one. Some Dispensationalists tend to believe in the different ages of the church but, traditionally, we have been in one age—the church age—since the book of Acts. Since we are the church, it is reasonable to read the letter to the churches as they relate to our own character, strengths and shortcomings. The promises apply to us all.

Next Lesson: The Throne and the Scroll

2 thoughts on “Revelation – The Seven Churches”